Just over ten years of partnership work has resulted in peat restoration equivalent to the size of 1000 football pitches in this special area.

The Forest of Bowland is known for its wide-open spaces and upland landscape, much of which is made up of heather moorland and blanket bog. A type of peatland, blanket bog is considered internationally important, and the Bowland Fells support the largest extent of this habitat in Lancashire.

Forest of Bowland AONB Manager, Elliott Lorimer, said, "£2.5 million has been spent on peat restoration in Bowland since 2010, helping to restore 755 hectares of blanket bog.  That's all thanks to the project funders, moorland owners and partners, including the Environment Agency, Natural England, United Utilities, Yorkshire Peat Partnership, Lancashire Wildlife Trust, Ribble Rivers Trust and of course, the contractors and volunteers who have made the work happen on the ground."

The remoteness of the uplands means that many people are unfamiliar with this very special habitat and the advantages a healthy blanket bog provides.    Sarah Robinson, Farming & Wildlife Officer with the Forest of Bowland AONB Partnership explained, "Peat is made up of partly decomposed organic material which builds up in waterlogged, acidic conditions and takes thousands of years to form. It offers us so many benefits: from its intrinsic worth and landscape value to biodiversity, flood risk management and improvements in water quality. It's also vital for carbon storage."

Over the decades, peatlands have been damaged through a number of factors including atmospheric pollution, drainage, wildfires, grazing, trampling and the effects of climate. Work carried out in Bowland aims to initially stabilise the peat, preventing further loss, and then restore it to the point where it can begin to capture carbon once again.

No two peat sites are the same, which means that restoration techniques vary from place to place across the AONB, but three main principles apply – control peat erosion, manage hydrology and re-instate vegetation cover.

This specialist work involves expert contractors who access the fells between September and March. Working in such exposed locations during the winter months can be challenging and the conditions are often less than easy. Andy Barnes from Terra Firma Environmental Ltd said "By investing in specially adapted machinery and developing our expertise in working in these unique upland environments we have been privileged to work closely with the  AONB ,estate and land managers to help them achieve their restoration vision over the last 10 years. Working in a defined geographical area such as the Bowland Fells  means that we are often working adjacent to sites that we have restored during the early years of the programme and watching the improvements develop in the hydrological and environmental condition on the restored areas is hugely satisfying for us as a team."

To date, work has been carried out on 18 fells covering land within each of the AONB's three main river catchments of the Lune, Wyre and Ribble. 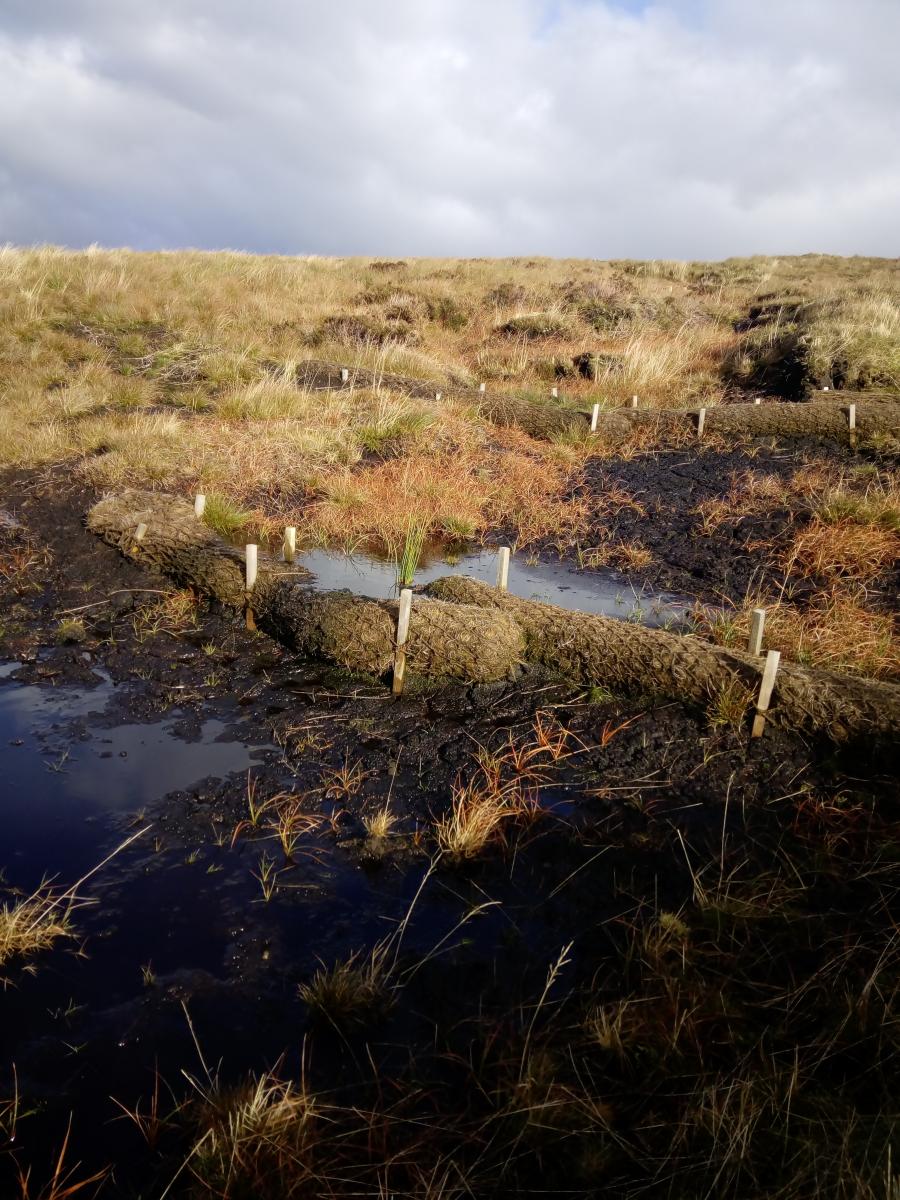 Mallowdale, above the River Roeburn in the Lune valley, forms part of the Bowland Fells Site of Special Scientific Interest (SSSI). Here, restoration work has been carried out sensitively over a number of years so as to avoid disturbance to ground nesting birds such as the lesser black backed gull. Emphasis has been on restoring the intrinsic biodiversity value of the site by rewetting the peat and restoring the blanket bog and heather moorland vegetation. Ultimately this will increase the habitat available for upland species such as fox moths, sky larks and green hairstreak butterflies.

Work in the Wyre catchment has focused on the headwaters at the top of the catchment, with natural flood management very much in mind. Blanket bogs act like sponges during and after high rainfall events. As sphagnum mosses can absorb ten times their weight in water, they hold onto the rainwater and let go of it gradually over time, slowing the flow of water off the fells and helping to reduce flashy flood risk downstream. Re-profiling steep sided peat gullies and installing coir logs, which build up sediment behind them, all helps blanket bog vegetation to re-establish, improving the water absorbing capacity of the fells.

Work on Pendle Hill in the Ribble catchment has been carried out as part of the four-year National Lottery Heritage Fund Landscape Partnership project. The summit of this iconic landmark has long been a popular spot and is visited by thousands each year.  Over time the vegetation on the hill has been eroded which has resulted in damage to the underlying peat. Director of Conservefor, Gareth Evans, explained, "Working closely with the AONB staff our dedicated team work hard through the winter months helping to protect and restore these fragile upland habitats for the future’’.

Restoration work has included the construction of scores of timber, coir and stone dams designed to hold water in place, along with path improvements and revegetation with heather brash, sphagnum mosses and cotton grass plugs. "Much of the original brash was washed away in the storms of 2020", said Sarah Robinson, "so we've had to go back and construct more dams to slow the speed of water during storm events and add geotextile as a type of carpet to protect the bare peat.  It just goes to show how extreme the conditions on top of the hill can be sometimes."

The Pendle Hill LP team have developed a special "Peat Freaks" walking route which explains all about the work on the hill.  The self-guided trail starts at the trig point on the summit and can be downloaded via the Viewranger link: https://my.viewranger.com/route/details/MzUxOTQyMA%3D%3D