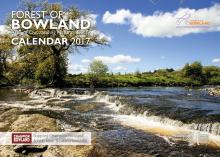 The Forest of Bowland 2017 calendar is now on sale and captures the unique sense of place of this beautiful area.  Featuring some wonderful, seasonal landscape, wildlife and farming photographs, funds raised from the calendar will support a range of fantastic local projects.

All calendar sales will be donated to Champion Bowland, which is a small charity working to enhance the outstanding landscape of the Forest of Bowland AONB. It does this by raising funds from visitor donations and charitable activity and these funds are then awarded to local projects which benefit the environment, local communities and visitors.  The charity has its own website - www.championbowland.org.uk – which features details of some of the work it has supported in the past.

The photographs in the latest calendar were all kindly shared by residents and visitors to the area via the AONB website - http://forestofbowland.com/visitor-photogallery  - and all the images submitted can be viewed there.  Keen photographers are still able to upload their photographs to the website where they have the chance of being chosen as "photo of the week", or even appearing in print in the AONB's 2018 calendar!

Copies of the calendar can be purchased online for £8 at http://forestofbowland.com/Forest-Bowland-AONB-Shop or in local Tourist Information Centres and businesses.  Or if you can collect them from the AONB office, please email hetty.byrne@lancashire.gov.uk Tel: 01200 448000

Plan ahead for the summer holidays with our downloadable family-friendly activity sheets and quizzes – now with a brand new, fun design like the summer quiz sheet here!  We also have lots of beautiful wildlife illustrations drawn by local artist, Louise Mills – brilliant for colouring in on those rainy days.

Plus, there's still time to enter our Bowland Picture Puzzle competition with the chance to win a free family ticket donated by Cobble Hey Farm and Gardens near Garstang!  Closing date is 19th August and you'll find all the details on our website at www.forestofbowland.com/Family-Fun

For anyone who loves the countryside but is less mobile than they used to be, the Tramper trek and walk at New Laund Farm above Whitewell on 1st and 2nd August offers the chance to experience some of the Hodder valley's most picturesque views.

Families looking for school holiday fun should check out Beacon Fell's Wednesday sessions during August.  With everything from pond dipping to Sheltercraft on offer, youngsters will be kept well entertained!

Get a taste of Lancashire's finest food and drink producers at this year's Clitheroe Food Festival on Saturday 13th August and come and see us up at the castle where we'll have some great family activities.

And don't forget Pendle Walking Festival!  Between August 13th and 21st there will be over 70 walks to choose from, with a number of them in the Forest of Bowland AONB.

For details of all Festival Bowland events go to www.forestofbowland.com/Festival-Bowland-Events 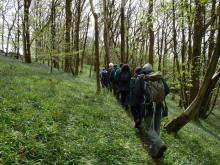 If you enjoy walking and can spare a few hours a couple of times a year, why not think about becoming a volunteer path monitor with us?

The Forest of Bowland has some fantastic walking opportunities with everything from easy riverside rambles to strenuous treks over hill and dale and many routes can be found on our website. This is a great resource for visitors but, to make sure that these promoted routes are as accessible and easy to follow as possible, we rely on keen volunteers to help us survey them.

Volunteers walk their chosen route twice a year, typically in early spring and then again in autumn.  They carry out small scale maintenance work like waymarking and cutting back overgrown vegetation and then feedback on any larger repairs or obstructions so that these can be dealt with.  There are routes all over the AONB and new volunteers receive training and a set of hand tools.  Our next training session is due on the evening of 4th August so, if you'd like to find out more, contact Sandra Silk on 01200 448000 or email sandra.silk@lancashire.gov.uk 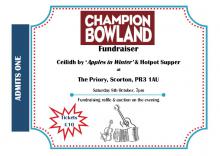 Join us on Saturday 8th October for a Ceilidh & Hotpot Supper at the The Priory, Scorton.

This is a fundraising event and social for AONB partners, businesses & friends, to help raise funds for Champion Bowland, and during the evening there will be a raffle and auction.  To find out more about Champion Bowland and the worthwhile projects it has recently supported visit: http://www.championbowland.org.uk

A big thanks to the Priory, Scorton who are supplying the venue and food for the fundraiser and to the businesses who have donated some fantastic raffle and auction prizes.

There's still chance to donate raffle and auction prizes, so we'd love to hear from you!  Please contact hetty.byrne@lancahsire.gov.uk

Since summer last year various branches of the Bowland Explorers' Club have been gathering clues to the whereabouts of their founder, Gertrude Fulshaw Smythe - and discovering Bowland at the same time.

Intrepid explorer Gertrude set off on her travels 50 years ago and had proved very elusive since then!  However, success came on 12th March when over 200 Bowland Explorers gathered at Gisburn Forest Hub and put in a concerted effort to track down their wayward leader.

Suitably hatted and booted, scores of families set out with journey sticks to follow the forest trail where they encountered exotic bird species, a hidden doorway, giant flowers and bog dogs amongst other fantastical surprises.  All their hard work paid off when Gertrude finally appeared from the depths of the forest to a very noisy reception!  The hungry explorers were then treated to a well-deserved feast back at base.

The event, which was delivered by Wild Rumpus and Mid Pennine Arts, was the culmination of Bowland Revealed, an Arts Council England funded programme which began in 2014 to celebrate the 50th anniversary of the designation of the Forest of Bowland AONB.  The programme was managed by Mid Pennine Arts and additional funding came from Lancashire County Council Arts Development Service, the Forest of Bowland AONB and Ribble Valley Borough Council.

For the full story go to www.midpenninearts.org.uk/bowland-explorers 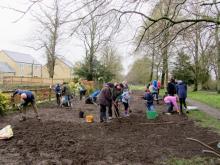 A grant to Lancaster Beekeepers has been blooming marvellous! The Pollinator Patches project has created mini meadows in the Lune Valley and over 200 volunteer hours have been put in by Little Hall Therapeutic team, Community payback, Scouts, Guides and helpers. The project was awarded a grant of £650 which helped to pay for preparatory work on the sites, plus gloves and cakes for the workers. The end result will be a blaze of summer this summer, and a fantastic resource for pollinating insects!

Champion Bowland have also awarded another pollinator focussed grant – this time to the organisers of the Cloudspotting Festival, to be held 29-31 July in Gisburn Forest. This grant will support an arts based activity called the 'Human Hive' which will encourage visitors to explore the restored hay meadow behind Stephen Park and part of the festival site. The project uses hives from throughout history, textile flower sculptures, live performance, a touch and taste station and display boards which together create a magical learning environment.

Things have got off to a busy start since the development stage of our big new Heritage Lottery Funded project which started in April. Cathy Hopley has been seconded as development officer for 18 months and has set up a number of research and survey commissions which will assess the area, identify important sites and information, and help us to prioritise projects which can be delivered in the next stage of the programme which will start in 2018.

These commissions include a survey of habitats and boundaries; a revision of our Landscape Character Area; archaeological research and fieldwork; a communications strategy and a visitor management plan. In addition an arts development project is working with a number of local artists to work up ideas for our audience development plan.

Cathy is also meeting with lots of groups and organisations to develop project ideas for the programme, and to set up some early pilot projects including a volunteers group. If you are interested in finding out more, or getting involved, take a look at our Facebook page https://www.facebook.com/pendlehillproject or contact cathy.hopley@lancashire.gov.uk

During the spring, working with Bentham Community Rail Partnership and Northern Rail, the AONB have developed new information boards at Giggleswick, Clapham, Bentham and Wennington railway stations.  The Bentham Line train stations are ideal gateways into the AONB and provide the opportunity for visitors to explore by bike or on foot.  The interpretation boards, as well as providing links to walking and cycling routes, highlight information about the wildlife, vibrant communities, dark skies and tourism businesses, to entice visitors to stay longer and experience the fantastic opportunities the area has to offer.

Gerald Townson, chair of the Bentham Line Community Rail Partnership (CRP) commented: “The Bentham Line, which links Leeds in the east to Lancaster and Morecambe in the west, skirts the northern edge of the marvellous Forest of Bowland. The train makes it easy for people to visit and help keep their journey environmentally friendly. These areas of unspoiled natural beauty need to be maintained that way for future generations, and using the train helps to achieve that. They offer a wealth of opportunities for everyone to enjoy them and help look after them."

A Voice for Northern Hill Farmers 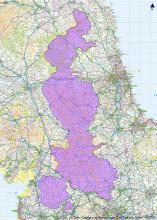 A proposal to form a Panel to represent hill farmers from England's northern uplands has been formally adopted by the board of the Northern Upland Chain Local Nature Partnership.

The Northern Hill Farming Panel will be a farmer-led initiative and will seek to address some of the challenges faced by those that farm the northern uplands. Early issues to be addressed are to include the implications of the result of the EU referendum and the implementation and limitations of the new Countryside Stewardship scheme.  The Panel will seek to represent hill farmers in future discussions with Government ministers and officials on how it can help foster a more sustainable future for farming in the northern uplands.

Late last year, the Northern Upland Chain LNP employed John Waldon of the South West Uplands Federation to provide advice and guidance on setting up the Panel.  John has spent a number months speaking with farmers from across the area, gathering views on how the Panel might benefit them and how it might operate.

The proposal is for a Panel comprised of hill farmers from all parts of the Northern Upland Chain. The Panel will be a farmer-led initiative, with the National Park Authorities (Northumberland & Yorkshire Dales)  and AONB Partnerships (North Pennines, Nidderdale & Forest of Bowland)  providing the support necessary for the Panel to function.

An Interim Panel was established at a launch event at the Jersey Farm Hotel, near Barnard Castle, on 28th June 2016. Two members of Bowland Land Managers Forum (Andrew Taylor and Peter Blackwell) attended the launch at the end of June.

We will be at the Cloudspotting music festival this year - 29 to 31 July. As you may know, the festival is hosted on the site of one of our restored meadows at Stephen Park. A small part of the meadow is going to be left uncut so that we can show people how amazing our Bowland meadows are! With wild flower and pollinator related children's activities, wildflower spotter sheets and advice on what people can do for pollinators at home, there will be lots going on. Our marquee will be manned by members of the AONB team, colleagues from YDMT as well as volunteers and Champion Bowland board members.

The Forest of Bowland AONB - a place to enjoy and keep special!

The Forest of Bowland Area of Outstanding Natural Beauty (AONB) is a nationally protected landscape and is international important for its heather moorland, blanket bog and rare birds. The AONB is managed by a partnership of landowners, farmers, voluntary organisations, wildlife groups, recreation groups, local councils and government agencies, who work to protect, conserve and enhance the natural and cultural heritage of this special area. For more information visit www.forestofbowland.com