Peatland Restoration Projects in Bowland 2011 to 2018 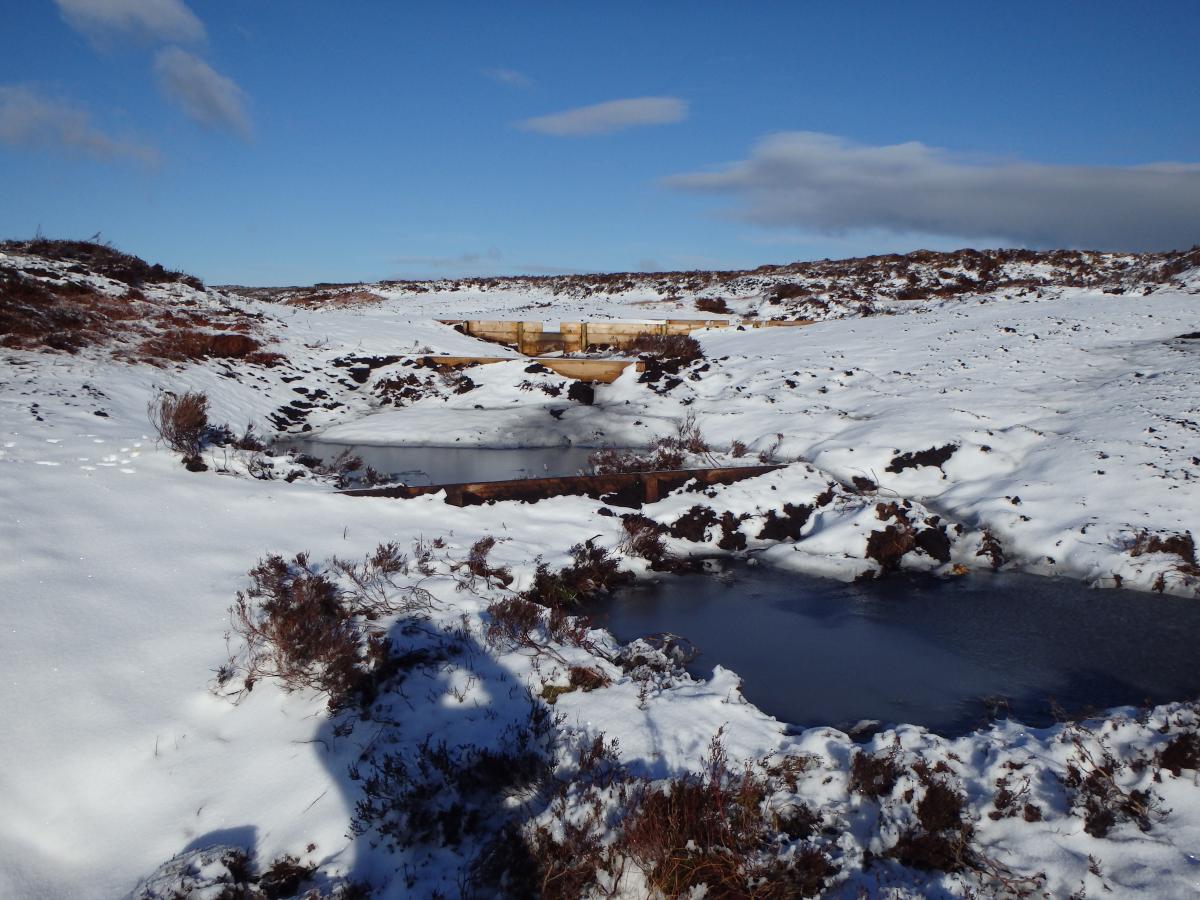 During early 2018 we were able to continue the restoration work on Abbeystead with a funding package put together by the AONB in partnership with Natural England, the Environment Agency and Grosvenor estates. The Environment Agency have also been working on modelling how catchments such as the Wyre can help to reduce the risk of downstream flooding through Natural Flood Management (NFM) measures, such as peat restoration and the installation of dams and blocking in gullies and grips.

Site visits in January 2018 showed how the work from 2017 was performing, with the wooden and peat dams holding back water in a series of pools, as shown in the photo below left. Further photo monitoring will continue to see how the transferred heather brash work helps to revegetate the peat over the coming months and years.

In early 2017, work began on another site on Abbeystead in need of restoration. This is known as Brown Syke 'South', as it is directly

adjacent to the Brown Syke site (see below), but at the top of the Wyre catchment instead of the Lune catchment.

This site covers approximately 70 ha, and is divided into three, based on the work needing to be undertaken. There are hag edges to re-profile, areas of bare peat to revegetate, peat pans and lenses which need low bunds to help to re-wet them and gullies to block. The work is going to be completed in two blocks, before and after the bird breeding season, as this is a nest site for the internationally endangered Lesser Black Backed Gull.

It is hoped that the work here will contribute to flood prevention in the Wyre catchment, continue to reduce carbon loss by stopping erosion and restore internationally important blanket bog habitat. The work is being funded by the Environment Agency, the Forest of Bowland AONB and Grosvenor estate, the landowners at Abbeystead. The contractors employed on the project are Terra Firma Environmental Ltd.

It is not always sunny on the top of the fells in winter, but the work continues nevertheless. The photos below show the team contstructing the low wooden bunds, as well as an areas of bare peat which has been bunded using a peat bund and a wool filled bund. For further information contact sarah.robinson@lancashire.gov.uk 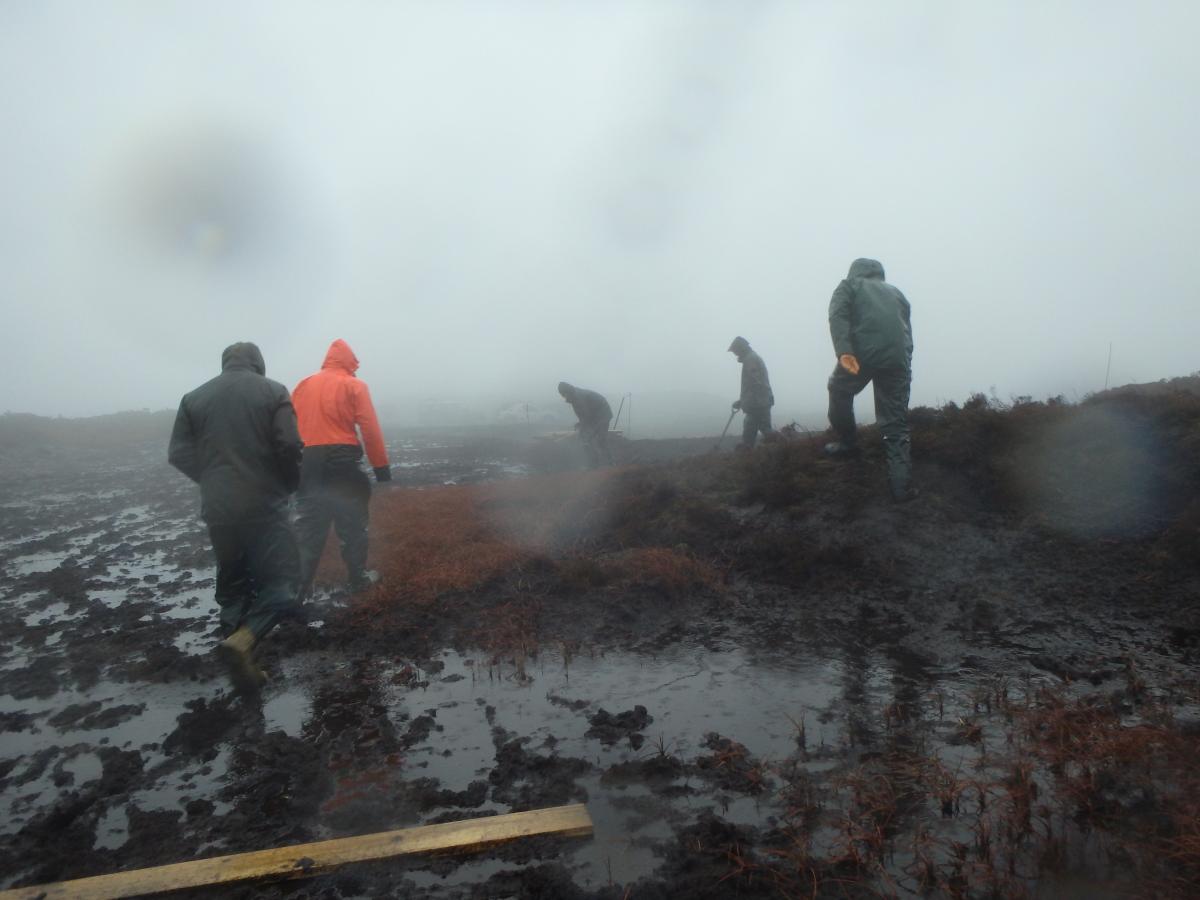 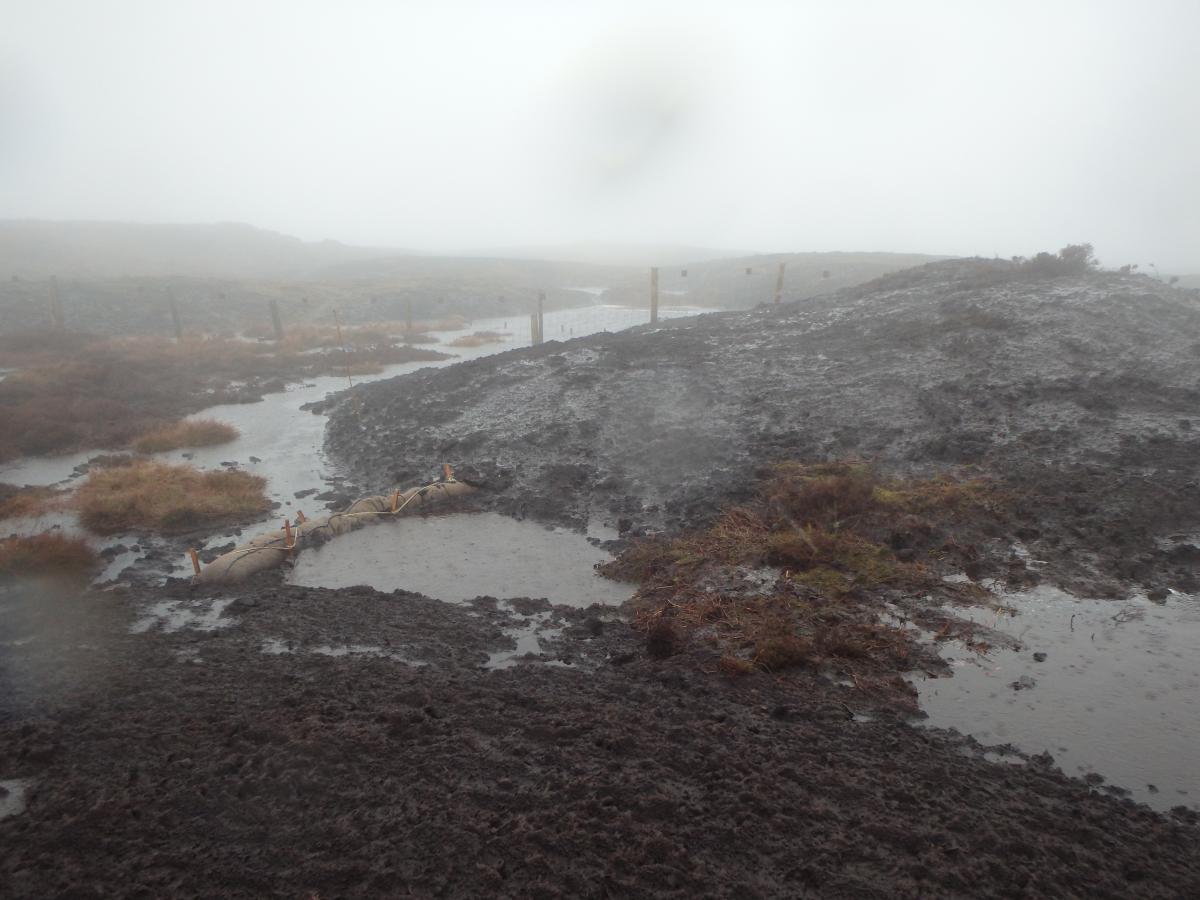 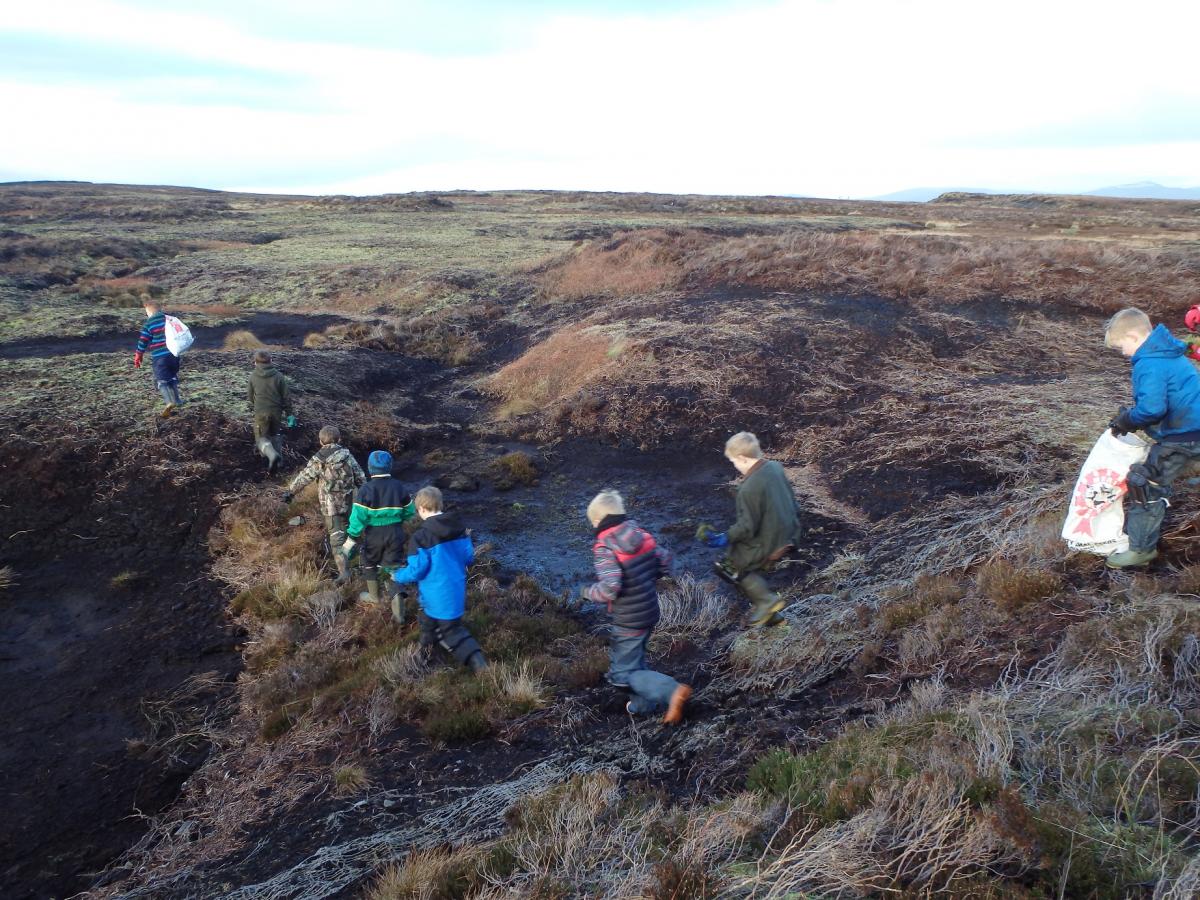 In the Autumn of 2015, a contract was let on the Brown Syke site at Mallowdale, and work was undertaken to lime, seed and fertilise the areas which had previously been re-profiled in 2013/4. Unfortunately the vegetation which had started to re-establish on the site during the spring of 2015 suffered from droughting in the summer months and so this additional treatment was needed to re-establish the vegetation. This project was made possible through funding from Environment Agency, the AONB and the Grosvenor Estate.

Additional work was undertaken during December 2016 to plant 600 plug plants of moorland plant species and to translocate aquatic sphagnum into pools which were formed by coir logs and dams during the first phase of work on the site. Pupils from Abbeystead School visited the site and completed the sphagnum and plug planting work, as well as learning more about the moorland which surrounds their home. This picture shows the children off to spread the aquatic sphagnum into some newly created pools, and also shows the vegetation starting to recover. 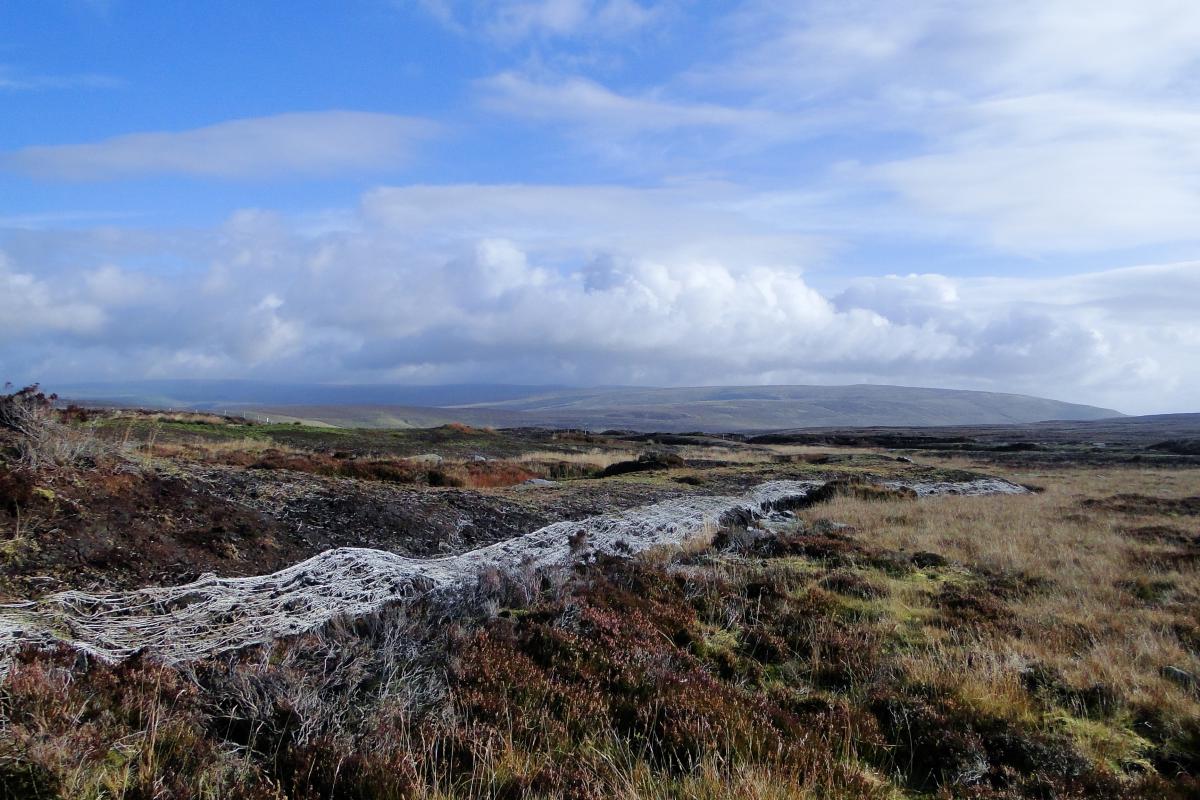 In October this year, Tarja, Elliott and Sarah met up with colleagues from Natural England, the Environment Agency and Abbeystead Estate to take a trip up to see the peat restoration works recently undertaken through the HLS scheme on Brown Syke, an area of Mallowdale on the Abbeystead Estate. Whilst the peat hags had been reprofiled, geo-jute applied, and heather brash, seed, lime and fertiliser added, some serious droughting during the summer of 2015 had put pay to the re-establishing vegetation cover. This means that the area is still very vulnerable to erosion removing peat, and hence carbon, from the site. 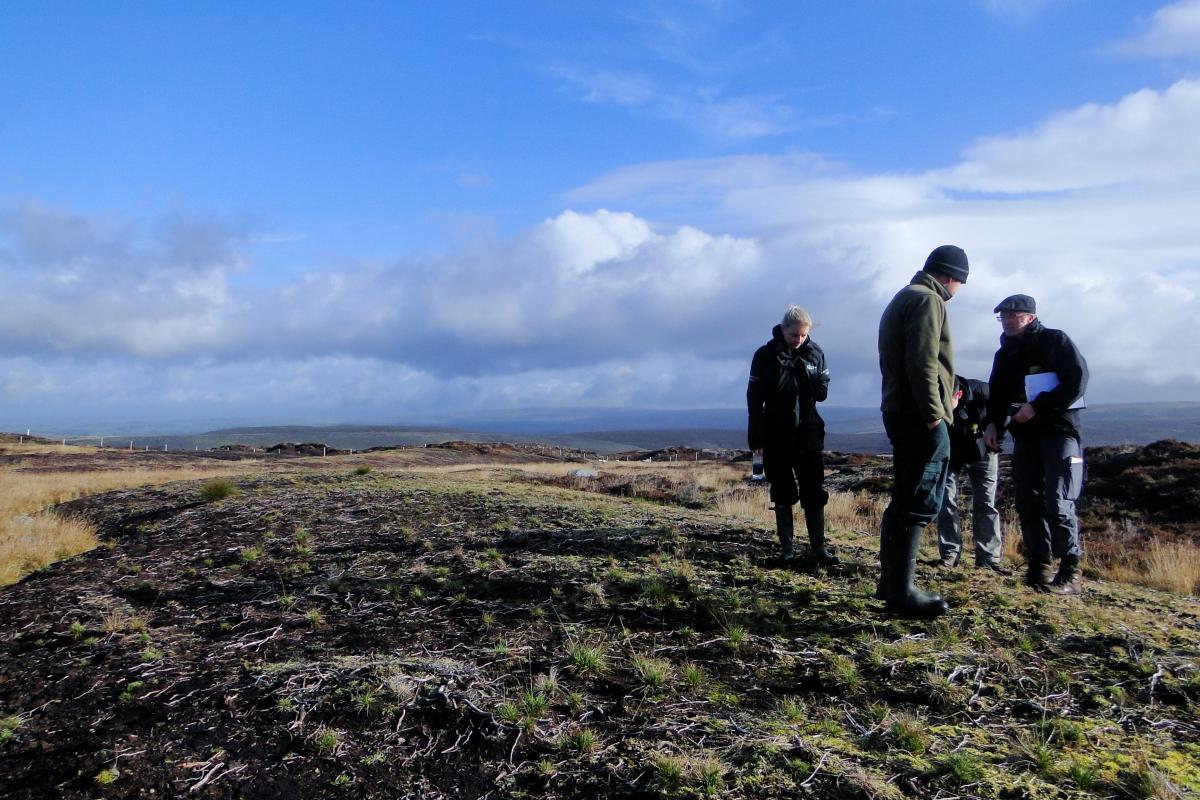 However, we are hopeful that, thanks to funding from the Environment Agency and the Estate, this can be addressed in the new year. We are currently letting a contract to re-apply the heather brash and seed mixture and to translocate aquatic sphagnum onto the site. The details of the tender process can be found here.

In November this year, Tarja, Cathy and Sarah spent the day up on the Bleasdale Fells moorland restoration site. The weather was rather murky, but hopefully the photos here do show continued signs of recovery. Here we can see some of  the common cotton grass planted out by volunteers in 2013, the expanding areas of Sphagnum moss translocated into the new pools also by the volunteers, and new vegetation growing on the re-profiled hags. 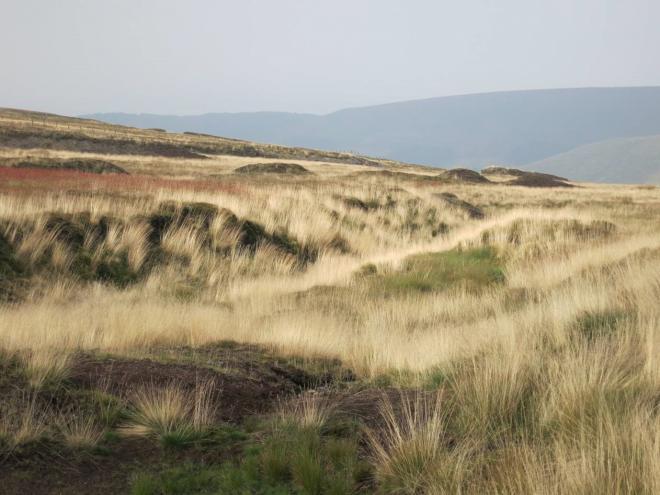 The hags are re-profiled to have a less angular edge which helps to reduce erosion of the peat by the wind and the rain. They are then limed and seeded to encourage vegetation growth which helps to stabilise the peat. 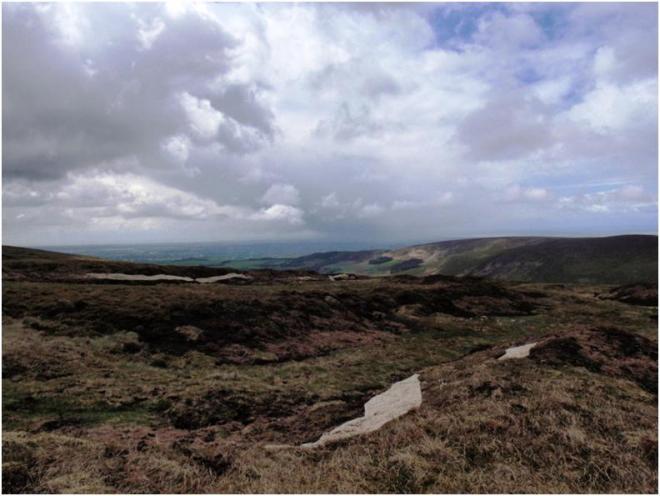 Over the winter of 2012-2013, further work was carried out on the Bleasdale Fells, building on the successes of the previous project outlined below. This time the work was mainly funded by the Environment Agency, with help and support from the AONB Partnership, the Bleasdale Estate and Lancashire County Council.
Further reprofiling and erosion control work has been carried out within the fenced out area on Fairsnape Fell, as well as on neighbouring Holme House Fell. Gully reprofiling has taken place over Fiendsdale Head, and much of the work can be viewed from the flag path which was put in place as part of the previous year's work.
The AONB Partnership also organised three volunteer work parties up on the Bleasdale Fells, planting moorland plug plants, translocating sphagnum mosses into newly created pools, and monitoring the vegetation currently present.
Signs are good that the moorland is responding well to the restoration works undertaken so far, and the AONB Partnership are hoping to develop a citizen science monitoring project on site, where members of the public will be able to send in photos from specific points, showing how the moorland is recovering.

View photographs of work in progress and following completion. 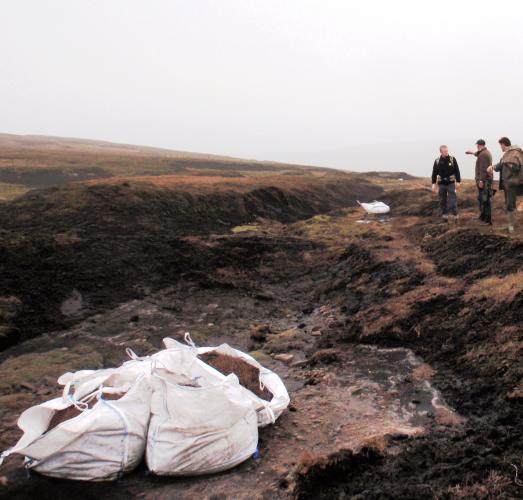 Over the winter of 2011/2012 a combination of habitat restoration and public access improvements have been carried out on Bleasdale Fells. This work has focused on two areas: Fiendsdale Head and Fairsnape Fell plateau, and has largely been funded through Defra's Higher Level Stewardship administered by Natural England with support from the Forest of Bowland AONB, United Utilities, Bleasdale Estate and Lancashire County Council.

Bleasdale Fells form part of the Bowland Fells Site of Special Scientific Interest (SSSI): part of this designation is because these upland fells support the largest expanse of blanket bog and heather moorland in Lancashire and provide suitable habitat for a diverse upland breeding bird community. The area has been designated as a Special Protection Area (SPA) under the European Birds Directive in recognition of this.
Unfortunately the habitats on parts of the Bleasdale Fells have deteriorated through a combination of natural effects such as the wind and rain, overgrazing, increasing recreational use of the area and the contribution of moorland wildfires. 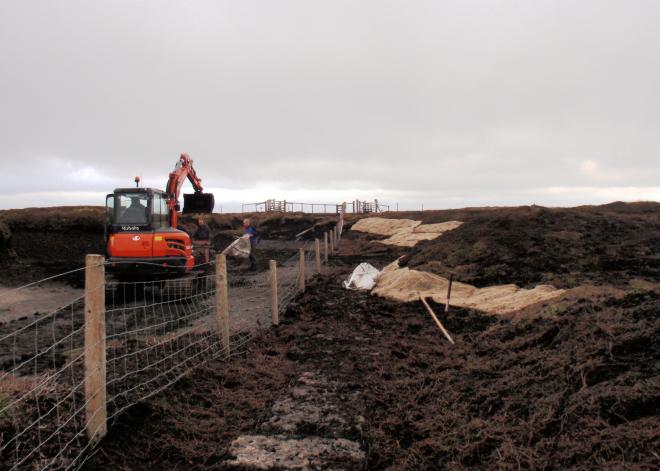 At Fiensdale Head to prevent further deterioration and enable the habitat to recover 840 metres of the footpath over Bleasdale and United Utilities land has been restored using a combination of flag path surfacing and subsoil re-profiling with associated drainage and habitat restoration. The eroding peat in the wider area has been re-profiled and heather brash/grass seed applied.
On Fairsnape Fell plateau a large area has been fenced off and within it the eroding peat hags have been re-profiled and reseeded with heather brash/grass seed. Until the edges are re-colonised and stabilised by the new vegetation these edges are unstable. The area has been fenced off to exclude sheep grazing.

At the fence junction near the cairn at 1707, use of the kissing gates over the deep eroding peat had become very difficult. Here the gates have been relocated away from the eroding peat and a subsoil/flag path has been created linking people off Wolf Fell to the cairn at 1707.  For more information on upland habitats have a look at our Habitat's page.