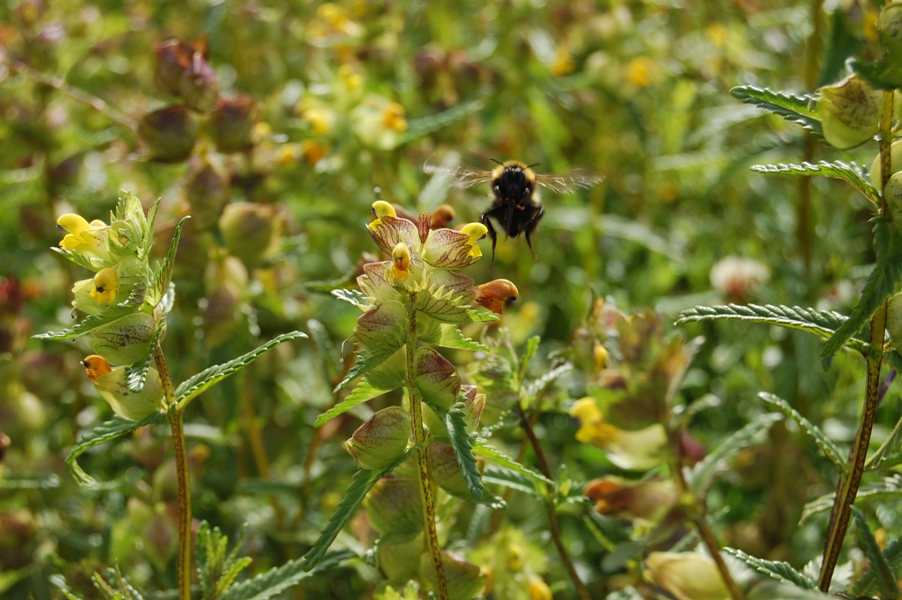 Delivered by Yorkshire Dales Millennium Trust in partnership with Forest of Bowland AONB, this 14- month project (2018-2019) engaged local volunteers and Kew Millennium Seed Bank to propagate and "foster" sustainably collected seed into plug plants. The four key species were bird's-eye primrose Primula farinosa, globe flower Trolllius europaeus, melancholy thistle Cirsium heterophyllum and saw-wort Serratula tinctoria. These species were once widespread in our meadows, road verges or stream and river banks, but have now declined into scattered, isolated populations around the area. In particular bird's eye primrose is listed as a nationally scarce species, is a Lancashire BAP target species and in 2012 cited as decreasing globally on the IUCN Red List. Using data provided by the Lancashire Environmental Records Network (LERN) team, surveying and soil testing potential sites, suitable locations for seed collection and re-establishing populations were found. Kew Millennium Seed Bank at Wakehurst Place in Sussex was commissioned to produce approximately 1000 plug plants from locally sourced seed of the four key species for the project.

The work focused mainly in the species rich hay meadows and pastures in the area, but also included some special verges. Engaging volunteers, landowners, community groups and Kew Millennium Seed Bank to grow local, sustainably sourced seed into plug plants, the project has successfully reintroduced 1100 plug plants of three scarce plant species at eight different sites across the AONB. The field scale hay meadow restoration work carried out through the Hay Time project continued, with 13 ha of meadows having restoration or enhancement work over the summer and autumn of 2019. The project has worked successfully with land owners, community groups and with schools. Over the course of the project our public events attracted over 80 people, sharing seed collection and propagation knowledge with landowners, both within and outside Forest of Bowland AONB, and educating local school children on the importance of wild flowers. We visited the fascinating seed bank at Kew MSB and discovered the journey our seed took through the various drying, testing and propagating processes. We also worked with an entomologist to find a rare fly species Chiastocheta, which rely on globe flower for the adult portion of their life cycle.

Hay Time will be continuing in 2020 with further field scale restoration, and more rare plug plants to place this spring. For further information contact Carol Edmondson 01200 448000, or email carol.edmondson@lancashire.gov.uk

During this time field scale restoration work also continued across the AONB, with more sites added to the tally. Our totals now stand at of 65 meadow restoration sites, covering over 300 acres of grassland in the AONB.

As well as the field scale meadow restoration, the project has a close and effective relationship with Edgehill University in Ormskirk. Since Elizabeth Sullivan started to study the Bowland SSSI meadows for her PhD in 2012, we have also hosted a student placement, assisted in MSc field trips to Bell Sykes and helped to organise MSc research for four students. This year was no exception, with two students studying the restored meadows and their donor sites - one project on plants and another on spiders hunting amongst the top of the hay crop. These are great collaborations, as their academic research continues to show the effectiveness of meadow restoration for biodiveristy as a whole.

In 2016 Carol Edmondson was our placement student, and that summer Carol went on to undertake her MSc research on the importance of restored meadows to foraging bumblebees, by helping to support the YDMT and AONB volunteers working on the Bumblebee Conservation Trust 'Beewalk' monitoring programme. We are very proud of the work Carol has done, not least because her reseach was published in 2017 - you can see a copy of it here (208). Carol's research showed that in the restored meadows, bumblebee numbers are as high as in the donor meadows from just one year after the restoration work has been done.