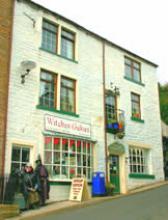 Newchurch clings to the southern slopes of Pendle Hill. The village is famous for St Mary's church and its curious 'eye of God' on the tower which watches over the village. The church was built in 1544 by the inhabitants of the five 'booths' of which Goldshaw Booth is now the village parish. The word 'booth' is thought to come from the Norse word 'but' meaning dwelling place. Only the lower courses of the sixteenth century tower now remain, the rest of the 'New' church was rebuilt in 1735. The grave of the Nutter family can be found in the churchyard, and you can find out more about them and the other 'Pendle Witches' at the little shop 'Witches galore' with its coven figures outside. Newchurch hosts a rushbearing ceremony each August with a procession around the village followed by crowning of the rushbearing queen and a Thanksgiving service in the church. Newchurch was awarded best kept hamlet in Lancashire in 2007.