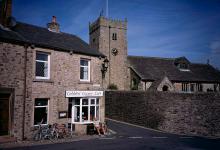 Chipping is a picturesque village on the slopes above the River Loud. In Medieval days no less than five water mills were sited along Chipping beck. This is a conservation area with stone-built cottages, 17th century school and almshouses endowed by John Brabin, dyer and cloth merchant. The village also has a 13th century church, which was partly re-built in 1505 and in 1706 and again in the nineteenth century. The font has been in use for over 400 years. Chipping has a cheese maker, a chair factory, and a craft centre. Several attractive Inns are to be found in the village centre. Chipping is also home to the oldest continuously trading shop housed within the village's quaint Post Office.