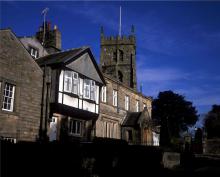 Bolton-by-Bowland is a tranquil and charming little village, with two village greens. The smaller green contains the remains of a 13th Century stone cross and old stocks. The village was recorded as Bodeton in the Domesday Book, meaning bow in the river. The church has many ornamental carvings and a font dating from 1500, which bears the arms of the Pudsay, Percy, Tempest, Hammerton and other families. The famous Pudsay tomb has an engraved figure of Sir Ralph Pudsay in full armour with the figures of his three wives and 25 children. Overlooking the River Ribble is Rainsber Scar, which is a beautiful spot - known locally as Pudsay's leap where William Pudsay is said to have made the leap on horseback when being chased by soldiers for illegally minting his own coins.