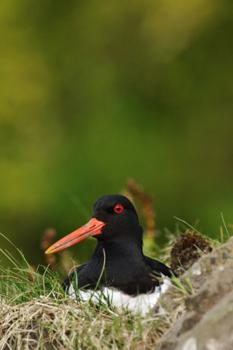 Its favourite habitat is along gravel bedded streams and shingle beside lakes, rivers and seashores, but it can also be found feeding in grass fields.  Noisy and excitable both in winter flocks and in breeding territory.  It typically nests on the ground, in the open or among low vegetation.

With its black and white plumage, orange beak and legs, and blood red eye, the oystercatcher makes a striking picture.  In flight, it shows a wide white wing-stripe, a black tail, and a white rump that extends as a 'V' between the wings.  One characteristic display is their so-called 'piping display' where both members of a pair bow forwards with their bill pointing down to the ground uttering prolonged chattering piping noises.

Listen to the Oyster Catcher: