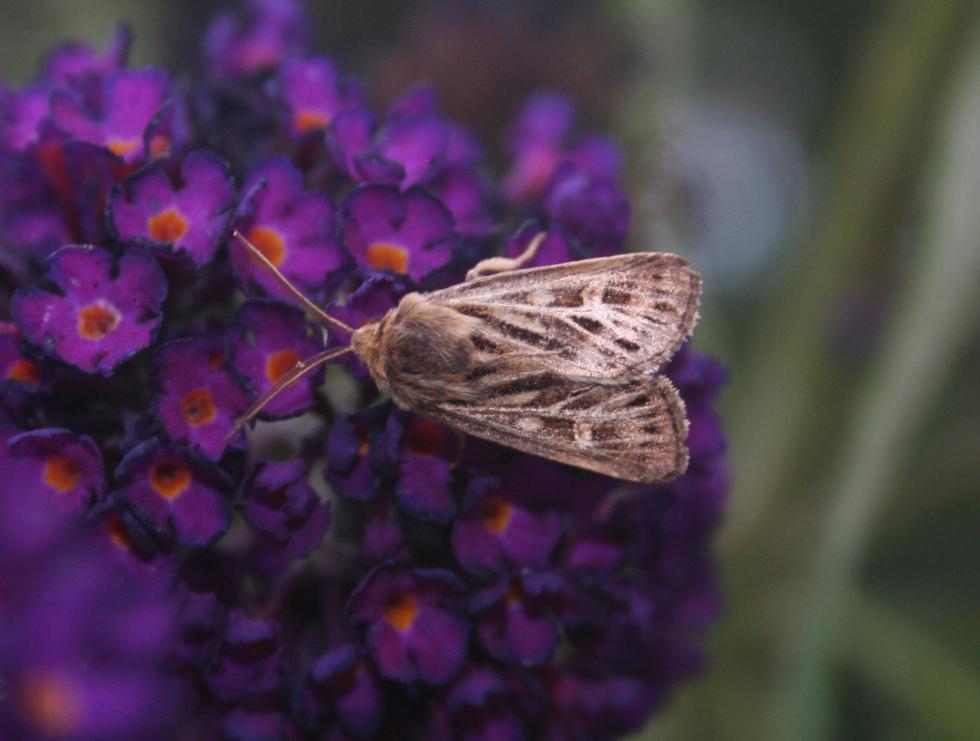 Darting across the moors at break-neck speed or gently flapping from one heather clump to another, day-flying moths are as much a part of the Forest of Bowland AONB as the birds and plants that make this area so special. During the night, the moors and woodland come alive with myriad insects, including moths varying in size from that of a match-head to almost big enough to cover the palm of your hand. Some of these also venture out on sunny days from April to September, searching for nectar, a mate or somewhere to lay their eggs. Amongst the more obvious and notable are those listed below. Click on each name to find out more about these beautiful creatures, where they occur and what they look like.

Perhaps the most common day flying moth over much of the moors, it can look quite butterfly-like as it skips low and erratically over the vegetation. The caterpillars eat the leaves of heather and heath in late summer spending the winter as a pupa. The moth is most frequently encountered in May and June, but is occasionally still present in early August.

The rapid low flight of the male Emperor Moth, skimming the heather tops, indicate he is searching for a female. She releases a scent (pheromone) which can attract many males from long distances but she only flies at night time, staying well hidden during the day. Less frequently encountered than in the past, this attractive moth is well worth looking out for on any sunny days in April and May.

In Lancashire, this moth is now restricted to areas of moorland in and near the Forest of Bowland AONB. Nationally it is considered quite a particularly uncommon moth. Rarely encountered, it is definitely a moth that could benefit from increased knowledge about its distribution – is it really as rare here as records currently suggest? The caterpillars feed on bilberry, cowberry and cranberry and the moth flies freely from July to September in warm conditions, even when the sun is obscured.

Although this moth is generally a dusk and night flyer, it is easily disturbed from amongst the heather and bilberry during the summer months. It can be surprisingly variable in colour from reddish-brown to pale lemon yellow but the general hint of yellow colour is always obvious. The caterpillars feed on bilberry.

As with the Northern Spinach, this moth is readily disturbed from the vegetation during the daytime but tends to prefer more sheltered localities than the preceding species. Its caterpillar feeds on heath bedstraw. Although rather cryptically coloured, a close look at this attractive moth is well worthwhile – the combination of reds, buffs, white stripes and black speckling make this moth a real joy to behold.