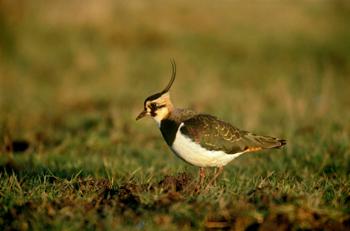 Despite their apparent widespread presence across Bowland, the population has been declining sharply over the past 30 years due to changes in farming policy. Thankfully, more and more Bowland farmers are entering parts of their land into Environmental Stewardship schemes that offer financial incentives to manage fields more sympathetically for lapwings and other ground nesting birds.

At a distance they appear black and white although closer inspection reveals a beautiful bottle green and purple iridescence to their plumage.
The noisy ‘peeawee’ call of the lapwing signals that spring has arrived in Bowland. Lapwings, or ‘tewits’ as they are known locally, are one of Bowland’s most familiar and charismatic birds.

RSPB video footage of a Lapwing:

Listen to the Lapwing: