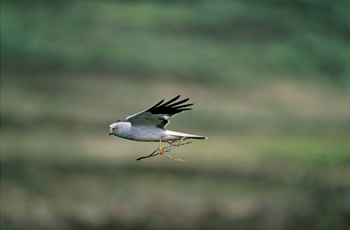 The Forest of Bowland is an important place for upland birds including the hen harrier.  Only one word can describe watching a hen harrier over moorland in spring - breathtaking. The graceful mastery of the air it displays as it quarters the ground hunting and the tumbling; its ‘sky-dancing’ display flight are a joy to watch.

Until recently, Bowland has been England's last remaining stronghold for breeding hen harriers, with the majority of the nests located on the estate owned by the water company, United Utilities.  The AONB Partnership continues to prioritise work with local partners such as United Utilities and other local landowners, RSPB, Natural England and Lancashire Police to deliver local actions to help implement the national 'Hen Harrier Joint Action Plan' and re-establish the hen harrier as a breeding species within the Forest of Bowland.  This includes facilitating liaison between Lancashire Police, Natural England and local land managers and assistance with monitoring during the breeding season.  The AONB Partnership also continues to offer support and resources to the RSPB's Bowland Project; delivering birds of prey conservation and monitoring on United Utilities estate in Bowland.

Female Hen Harriers are a rich brown in colour with dark barring on the tail and wings and a distinctive white rump. The males are smaller and a beautiful pearly grey in colour with distinctive black wingtips.  It is silent except when nesting when it makes a rapid 'yikkering' call during its sky-dance display along with various other scolding calls.

Listen to the Hen Harrier: