Our vision is that, "Every change in the built environment of Bowland should conserve or improve the character of the Area of Outstanding Natural Beauty."

We will achieve this vision by -

Purpose of the AONB with respect to the built environment

Our purpose is to conserve and enhance the beauty of the area, which includes the pattern of settlement and built environment; including the villages, the houses in them, the churches and graveyards, the roads, bridleways and tracks that link them, the signs that tell us where we are, streetlighting and other lights, the verges and roadside railings, the hedges and walls that border the roads and divide the fields.

'Local distinctiveness' in the Forest of Bowland

The aim of the following examples is to showcase features that are distinctive to parts of the Forest of Bowland Area of Outstanding Natural Beauty. There are many pressures on domestic and agricultural buildings and on the infrastructure of roads, bridges, gates, walls and hedges that have grown up since they were originally designed and built. Suffice it to mention the expectation for bathrooms/showers and garages for domestic properties and the increased size of agricultural machinery necessitating wider access to fields. It is unrealistic to think that these pressures can be entirely resisted so we would like to conserve what we can and change what we have to in a way that is sympathetic to the neighbourhood and tradition of the area.

The following three photographs show the villages of Downham, Bolton by Bowland and Calder Vale. These villages are all in conservation areas where development is controlled. The character, however, of each of these the villages is different; there is no one style of village or settlement that is 'right', villages generally develop their particular character over time. Downham is picture postcard pretty but has the air of a working village related to the agricultural business of the Downham estate and nearby Downham Hall. Bolton by Bowland is  a larger village with two village greens and some grand old houses as well as cottages. Calder Vale on the other hand is an industrial village that was created for the industry that grew up around the stream that could be harnessed to provide power - originally for a paper mill and latterly for a cotton mill. Calder Vale was developed over a much shorter time than Downham or Bolton by Bowland and the neat terraced houses were built as workers cottages by the original Quaker mill owner. 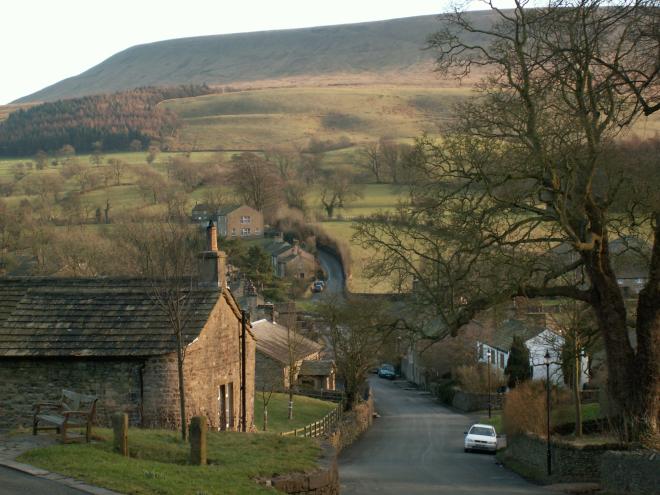 Downham - note the absence of road markings and obtrusive signs. The street lighting operates on reduced power at night.

The key visual featues of a house are the roof, the windows, the doors and the chimney stacks. The houses/cottages in the following photographs are particularly pleasing in that they have grey slate roofs, windows that are regular and in some cases  to the original sash pattern, original chimney stacks and pots and doors that are 'appropriate'. It is particularly difficult with windows and doors as they are subject to replacement. However, uPVC is far from ideal, being subject to discolouration and degradation over time, and wood remains a sustainable alternative. 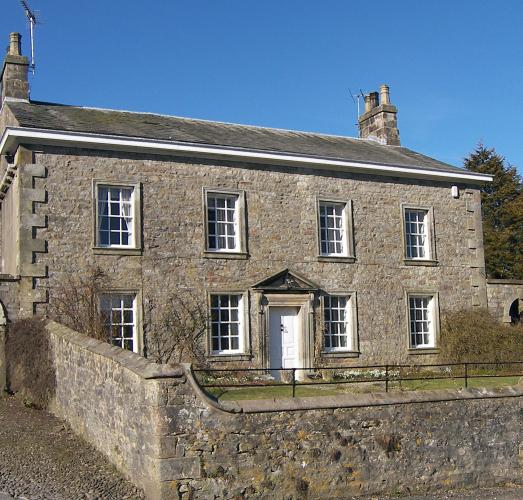 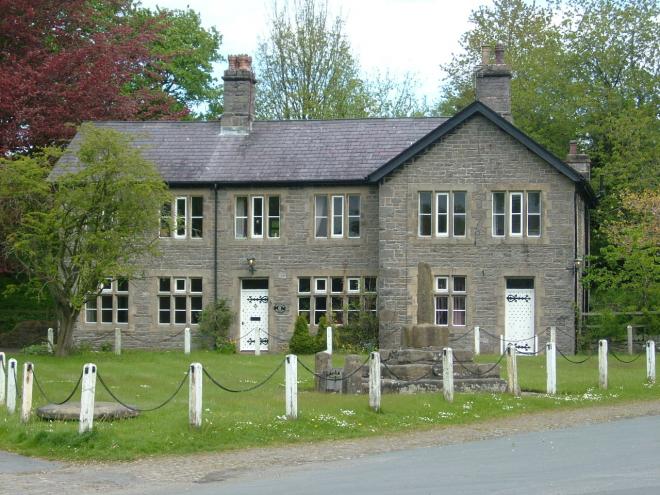 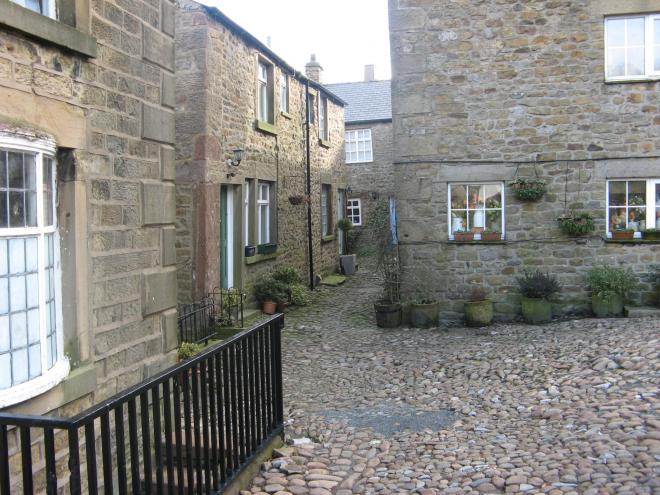 Cobbles are the original hard wearing road surface for well used roads and drives. Tarmac has been laid over most cobbles but those that survive should be cherished!

Stone setts on the left in a private drive are probably not original but complement the look of the house. The cobbles on the right are in Chipping where they fit perfectly. 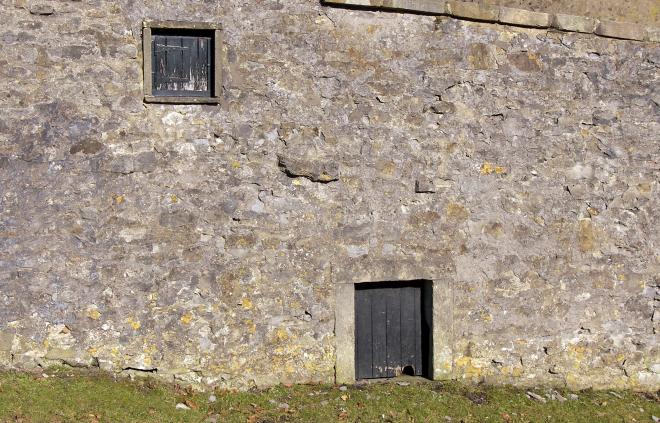 There are some features of houses that have no current purpose. Sometimes it is better to retain them than blank them off or brick them up. 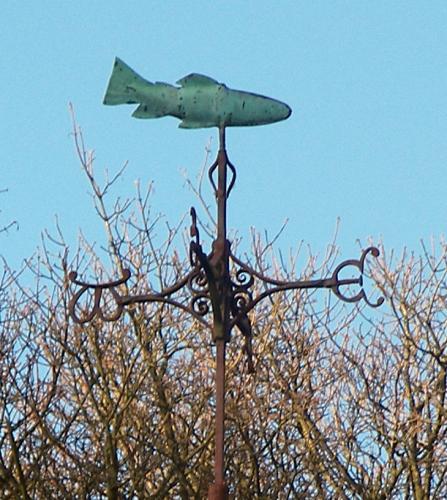 This  weather vane is no doubt unique.  It would be a shame to change it. 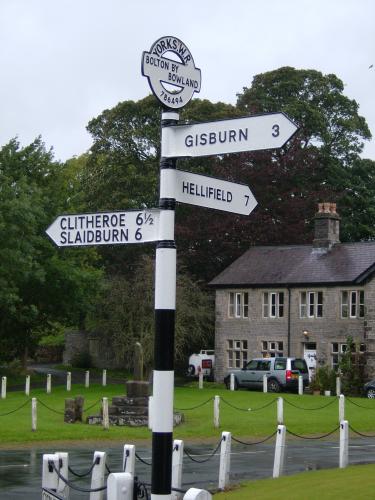 The signs shown here have been restored to how they looked at a certain point in time; originally, signs would probably have been wooden. The one on the left is at Bolton by Bowland when that village was part of Yorkshire's West Riding prior to 1974. It complemets the tranquil village green.

The Forest of Bowland AONB is keen to work with County Highways departments to retain and restore selected signs and to remove any unecessary signs that state the obvious or are otherwise redundant and clutter the landscape.

There are several important mile stones and boundary stones within the AONB. Some are monuments listed on Lancashire County Council's Historic Monument Record (HMR). Cast iron 'WR' (signifying West Riding) markers exist beside some bridges in that part of the AONB that was once part of the West Riding of Yorkshire, around Slaidburn, Newton and Dunsop Bridge.   Markers and stones should not be removed and advice should be taken on maintenance from the AONB unit in the first instance. Highways should review whether new signs are needed should old ones be in place. 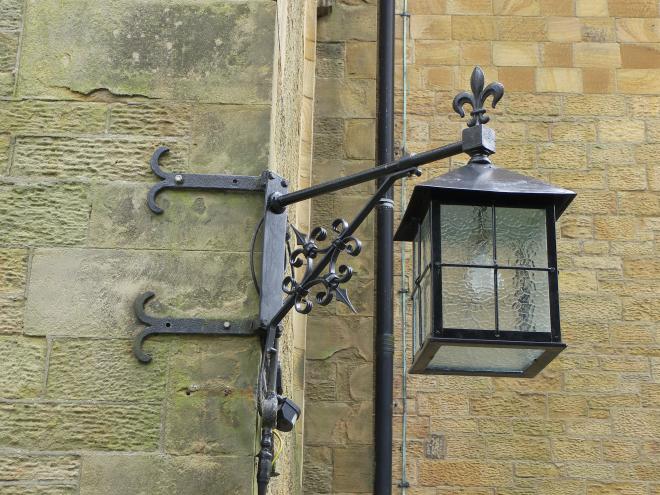 Street lighting in rural areas is less of a safety issue than in towns and cities but energy conservation and light pollution concerns have increased in recent years. Opportunities to reduce light pollution by reducing power and/or street lamps should be taken where possible. Yellow lighting looks particularly inappropriate in the AONB and should be avoided where possible.

Domestic 'security lighting' can also be intrusive and we recommend that homeowners should respect their neighbourhood and resist installing systems that will make their properties stand out; whether in villages or in isolated situations. Timers should be used to switch off unnecessary lights and the intensity and colour should be reasonable.  Have a look at our Intrustive Lighting Position Statement on this page.

Here is a lovely external light attached to the Austin and Paley designed church at Scorton.

What about the brickworks and the slaughterhouse? 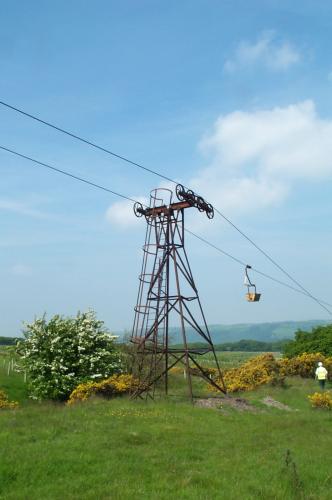 There are buildings and structures that may have been shunned in their day and thought of as ugly when they were built but have now become part of the landscape and would be missed if they were summarily demolished or taken down. The towers that support the aerial runway for the brickworks at Claughton for example. It is hard to think of modern day structures that may also stand the test of time but some may do.

Gardens can be a really valuable resurce for wildlife and we would recommend everyone with one to consider making allowance for and encouraging wildlife. A key point for people thinking of adding to buildings and/or repairing or converting them is to continue to provide nest sites/roosts and to provide them where possible. It is relatively easy to provide nest sites and roosts for birds and bats and here are some links for these and for other conservation/wildlife organisations -

The RSPB has an excellent site on wildlife and bird boxes. If you want to know more about the important species for Bowland then search elsewhere on our website.

Amphibians and reptiles - 'Froglife' for frogs, toads and lizards